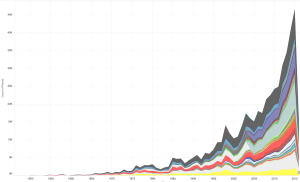 The visualization above compares trends in the number of parts used with a particular colour in Lego sets by year. At fist glance, the timeline could be somewhat difficult to read. Thankfully, Tableau’s built in interactive data selection tool was available for analysis. For this visualization I felt that
analyzing the colours was important enough to quickly colourize the graph by hand. One theme that can be seen is that more basic colours were used in initial sets (such as red, black, yellow, ect.) while other less common colours were introduced in later years. Most original colours play a role in sets to this day. As demonstrated in other visualizations, the number of parts used in sets has increased in recent years. Another interesting trend can be seen around 2004. Light Grey parts were completely replaced by Light Blueish Grey parts and
Dark Grey Parts were replaced by Dark Blueish Grey parts.